On August 21, 1872, G. Deidrich purchased from B. F. Allen ten acres for cemetery purposes in the north part of Avoca.  Mr. Deidrich was acting as agent for the citizens of Avoca.  Later ten acres were added.

Sometime in the mid to late 1870s, before records were kept or were poorly kept, a grass fire occurred on the south and western portion of the cemetery.  It destroyed the identity of a number of graves.  Some of the old timers said the identity of about 25 graves were destroyed, while others say the number was closer to 40.  These graves were either unmarked or had some type of wooden marker.  After the grass fire occurred, the area was sealed off.  The entrance to Graceland Cemetery which had previously been on the south was changed and moved to the east side.

According to legend, the Octagon Building was erected probably in the mid to late 1870s as a monument in memory of the people buried in the unknown and unmarked graves.  It was probably used by mourners and friends as a meeting place, especially in cold or inclement weather to get warm and say final good-byes before starting home with their teams and buggies.  The benches attached to the inside walls were capable of seating 35 to 40 people, and there was a stove located in the center.

In September 1984, the Newtown-Avoca Historical Society reactivated with the purpose of saving and restoring the Octagon Building.  Total cost of the restoration was $1,949.69.  The restored building was open to the public Memorial Day weekend in 1985.

In March 1986 the Iowa State Historical Department approved the nomination of the Octagon Chapel as a National Historical Site.  In January, 1987 the Newtown-Avoca Historical Society received the official certificate listing the Octagon Building in the National Registry of Historic Places.

The Newtown-Avoca Historical Society is in the process of again restoring this building in 2018-2019.

Visits to the Octagon Prayer Chapel can be arranged through the Newtown-Avoca Historical Society. 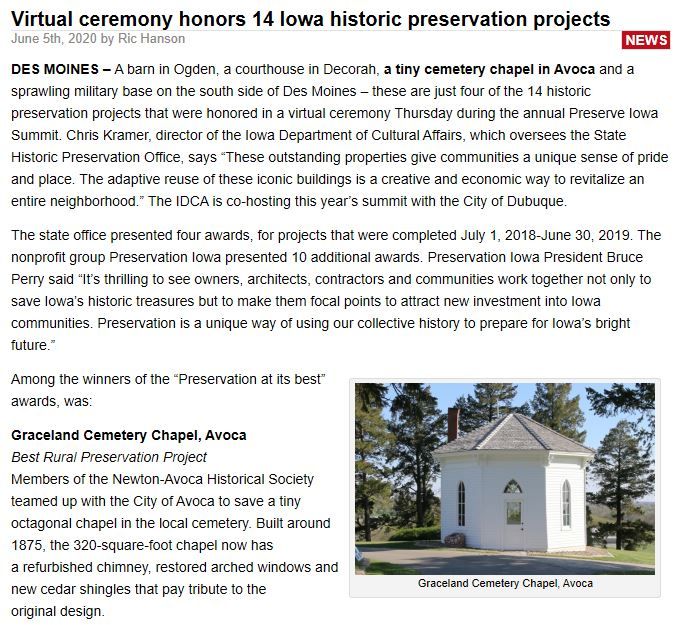 Check out this website by clicking on the link above.  Find the graves of ancestors, create virtual memorials, add 'virtual flowers' and a note to a loved one's grave, etc. As of May 5, 2022 there were 3,519 memorial pages created for Graceland Cemetery in Avoca, Iowa. You could possibly find gravestone photos, family photos, obituary information, plus links to other family members.